Hi guys,
As you might know i did my Ironman last weekend and i decided to write a short race report from the race. The race was initially moved from June to 23 of July because of the tragic terror attacks to the city a year ago.

We were expecting a hard course for the bike and a hot and steamy run. We got exactly that.
35 degrees on the run after 3 steep climbs in the mountains on the bike.

In May when i was in the area for work i did a bike run between Monaco and Nice just to check out Promenade de Anglais in Nice and the hotel i had booked. I decided to change my initial hotel to a one closer to the start and finnish area. That was a great move! The promenade is long and it was great to be close to the venue.

I arrived in Nice on the Thursday night before the event. Fixed my bike in the morning on Friday and went for a short swim. In the afternoon i did a 30 min run what felt like a 2 h run because of the heat. I knew then that the run was gonna be a big struggle. I know my body from my previous life and i know i need more time then 2 days to get used to warmer weather.

Had my bike check in on Saturday afternoon. Everything went very smooth and professional. Lowered the tire pressure because of the heat and put everything on the bike except the nutrition because as i didn’t want the energy bars to melt.

Sunday morning start at 6:30 am. Was in the transition area 1h before. Pumped the tires and put the drinks and bars on the bike.

The swim went really well. Rolling start and put myself in the 1:12 group for the Swim. A bit crowded at the boyes but i decided to always be on the outside lane not to be involved in any accidents. It was a good strategy i feel. Swim time 1:06. 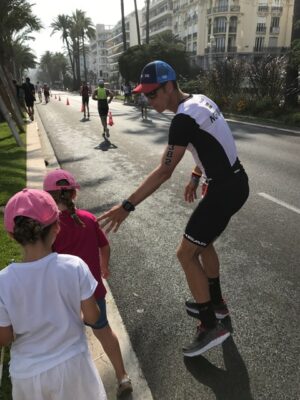 Great transition to the bike. The first 20 km very flat before the first steep climb. Put the the chain on the lowest ring in the front and stayed sitting. Small descent before the big climb of 20 km to Col d Lécre (2000 m above sea level) at 70 km. Was sweating like a pig at this point. Pretty flat until 110 km where a quite tough climb followed again. People was starting to get tired i could feel. I felt great however. The only thing that bothered me a bit was the fact that i could not drink the energy drink provided as my stomach started to hurt a bit. A had water and my extra bottle of Resorb. I also tried to have 1 energy bar per hour and also a few gels. My idea was to cut back on the bars on the run and focus more on the gels as its easier to take when running. The end of the bike was a tough descent followed by 20 km of flat. I didn’t push as i wanted to get a lot of fluid in my body and wanted to spin the legs before the run. I finished the bike in 5,59. Was really happy with that and i arrived back to Nice with some experienced Triathletes.

Great transition again to the run. I really wanted to start slow and controlled on the run. First km was to fast. I told myself to slow down but the second km was also to fast. First energy station and the energy gels was missing at the station! SHIT. I had 2 gels with me on the run (as i thought there was gonna be gels on the stations) and my usual emergency plan so i started to plan for when to take the gels.

Boom. After 8 km on the run i started to cramp in my hamstrings. Pulled my first gel. Tried to run again. Boom in the other hamstrings and the calfs. At this point i pulled the emergency liquid. The cramps went away after 15 seconds and i was able to Finnish the race half jogging and walking in 4,54. Not the run i was planning for but a great experience anyway. It was amazing to feel the body totally empty on electrolytes probably.

Overall time 12h10min for Ironman Nice. Happy to have finished the race and that i can now call myself an Ironman:)

I attended the after race buffet that tasted amazing. Great organisation post race as well. I can truly recommend the Nice Ironman for anyone seeking a big physical and mental challenge.